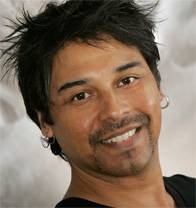 Having been in the industry of hair design for over twenty years, Mikel has obtained the knowledge of successful salon management and retail sales, combined with his imaginative and exciting approaches to hair design. As a Master Associate, Mikel has traveled the globe training stylists in John Paul Mitchell Systems® the color and Paul Mitchell® luxury hair care while performing his unique techniques on stage. His international travels include South Africa, Italy, Spain, Germany, South East Asia, Switzerland and the Caribbean. Mikel has been trained through Colorcutting USA® (Carefree, Arizona with Scott Cole and Linda Yodice), Progressive Hair Arts Plus® (New York City, New York with Donald Scott) and worked the stage with Paul Mitchell, Jeanne Braa, The Chadwicks, Floyd Kenyatta and Robert Cromeans, Artistic Director for Paul Mitchell. He has also designed hair for 7th on Sixth, in New York City for fashion designers such as: Bill Blass, Donald Deal, Mary McFadden, Han Feng and Valentino with Richard Dalton. Mikel maintains his status as a John Paul Mitchell Systems® Task Force member and international trainer. Many consumer and trade magazines have features Mikel's work, showing his areas of expertise in the fashion forward progression of hair design. He continues with his research and development of what consumers are looking for and what fashion suggests as style. Mikel's sense of style and fashion have made him one of the most sought after artists working in the beauty industry today.


Which country had most influence on you?
South Africa


Which hairdresser inspired you the most?
Robert Cromeans


What does it mean to you being a hairdresser?
Making people look good but more importantly feel good.


If you were a product, which one would be it?
Paul Mitchell Super Skinny Serum


If you were allowed to bring 3 things on a styling tour, which would that be?
PM smoothing iron / PM Carving comb.
My associate Katie Coonrod.

What was your latest embaressment (on stage/ with a customer)?
Nicking an ear on one of my most long time gentlemen customers


Which step do you regret?
Not hiring young talent sooner.


The best Beauty investment in your life?
Re inventing my salon culture


What do you never forgive a customer?
Talking bad about one of my team members.

What bores you about hairdressers?
Gossip


Your next big event?
Performing a show in Taiwan

Whom would you like to style and why?
Brad Pitt and Angelina Jolie / they're hot